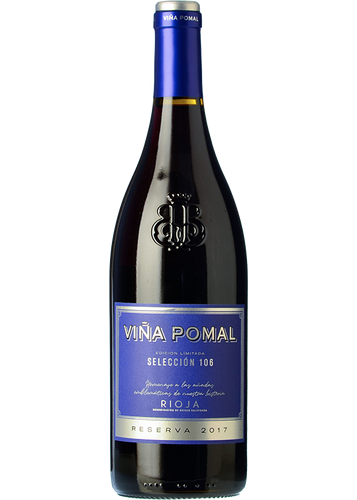 The Viña Pomal 106 Barricas is a limited edition that began with the 2010 vintage, a historic year for Bodegas Bilbaínas, as a tribute to the one hundred and six vintages of Viña Pomal; the first for Viña Pomal was in 1904. It's also a selection of a hundred and six barrels, undertaken by Alejandro López, the bodega's winemaker.

The wine, primarily of Tempranillo with small percentages of Garnacha and Graciano, ferments using native yeasts at a temperature of about 28º and macerates with its skins for 25 days. Afterwards it matures for 20 months in American (84%) and French (16%) oak barrels, a third of which are new. The wine gets cleaner with successive rackings, carried out naturally; on leaving the barrels, it completes its refinement in bottle for two years before being released onto the market.

In the glass it appears an elegant cherry colour with hues on the rim of ruby to brick red; its tears are fine and plentiful. On the nose, bramble fruits, red plums and scrub, adorned with refined spices and subtle balsamic notes; oaky traces, delicate lactic touches, liquorice and violets. Its entry on the palate is fresh and restrained, balanced, with some fine grainy tannins and a silky feel. On the finish it leaves us with hints of pepper, toasted almond skins and chocolate, all so seductive that it virtually entices you to keep on filling your glass. A fantastic wine which combines to perfection the iconic oak nuances of the best Rioja classicism with fruit-forward touches demonstrating modernity; a red that's capable of pleasing a wide variety of consumers, and for which careful decanting is recommended and drinking slowly.

The ratio price quality is excellent. The wine is very good with lasting taste and full body. Baroque is very alive on this wine.

Bodegas Bilbainas was established in 1901, when a group of Bilbao businessmen bought the winery from French producers who had created it in 1859 as a result of the phylloxera crisis in Bordeaux. Reference brand of Rioja red for many years, currently Bodegas Bilbainas is the largest vineyard owner in La Rioja Alta, with more than 250 hectares located in the municipality of Haro. Since its origins, the winery has specialized in farm wines that it produces based on the type of...