Located in the centre of Tarragona province and with particularly complex and exceptional natural features, the region was introduced to viticulture by the Carthusian monks who established the priory (priorato) of Scala Dei in the 12th Century.

Located in the centre of Tarragona province and with particularly complex and exceptional natural features, the region was introduced to viticulture by the Carthusian monks who established the priory (priorato) of Scala Dei in the 12th Century.

The quality and distinctive character of its wines are due to the mountainous terrain that requires the vines to be cultivated on terraces and most especially due to the type of soil found locally, the licorella (slate), which gives the wines their decidedly mineral character.

Traditionally known as an area that produced rough, high alcohol wines, at the end of the 1980s and during the 1990s, this region underwent such a spectacular revolution in terms of quality that nowadays its wines are internationally famous. In the year 2000, it became the second wine-producing region to achieve the status of Qualified Denomination of Origin.

The small mountainous region of the D.O.Q. Priorat appellation is located in southern Catalonia. The Montsant massif forms its northern boundary, while the La Figuera mountains are to the west and the Molló range to the east. The area opens up to the south following the River Siurana, the geographical backbone of the land, and its tributaries through a landscape of valleys, small plains, hillsides and steep mountain slopes.

The D.O.Q. Priorat is within the county of Priorat and its vineyards are based around ten different towns and villages: Bellmunt del Priorat, Gratallops, El Lloar, El Molar, La Morera de Montsant (where the Scala Dei villa is located), Poboleda, Porrera, Torroja del Priorat, La Vilella Alta, and La Vilella Baixa, as well as the northern part of the municipality of Falset (the area known as Masos de Falset).

The Carthusian monastery or charterhouse of Scala Dei represents the historical birthplace of wines and winemaking in the Priorat region. When the monks arrived from Provence in the 12th century to set up the monastery, they brought with them the knowledge and skills to develop winemaking here. The activity soon caught on and has evolved over the centuries into the wines we know now.

It is said that King Alfonso I sent two knights to search Catalonia for the ideal place to build the monastery. When they arrived here, and stood at the foot of the Montsant mountains enraptured by their beauty, a shepherd approached and explained that a ladder would sometimes appear leaning on the highest pine tree and angels would climb and descend it – the stairway of God (Scala Dei). The knights reported this to the king who immediately offered this area to the Carthusians for their monastery. In 1194 they built the altar of the temple dedicated to Santa Maria on the site where the tree of the legend had stood. The monks immediately started to cultivate vines and produce wine, while imbuing the monastery with a mysticism and strength that still charms visitors to the ruins today.

Centuries later, another significant historical event would mark the winemaking life in Priorat but this time in a negative way. At the end of the 19th century and start of the 20th, the phylloxera outbreak devastated most of the vineyards. This coincided in time with a huge boom in the textile industry in Catalonia which needed an influx of workers, so many people left the area for the big industrial cities. Few new vineyards were planted but, fortunately, they not only survived but thrived and are the background for Priorat wine today. The generation of winegrowers who struggled to continue working in the 1940s and 50s maintained the winemaking traditions alive and eventually this led to the new boom in wine at the end of the 1980s when a group of pioneering visionaries made a firm commitment to creating quality wines in an area which had become largely forgotten and ignored. Nowadays their wines are sought after and enjoyed by wine-lovers around the world and the names of the wineries (Clos Mogador, Clos Dofí, Clos Martinet, Clos de l’Obac and Clos Erasmus) resonate among the names of the most traditional and prestigious cellars.

The D.O.Q. Priorat is the only ‘quality designation of origin’ appellation in Catalonia and one of the only two in Spain – the other one being D.O.C. Rioja. To obtain this designation (a step up from the more common D.O. ‘designation of origin’ label) ten years must have gone by since the winemaking region in question became a D.O. and they must fulfill strict rules regarding traceability (plots, varieties, transport, elaboration, ageing...) and quality (organoleptic and analytical checks).

The Priorat landscape is unique; climate and soil come together to create an environment which leaves no one indifferent. The land is austere and hard to work, dominated by a kind of slate known as llicorella. Relatively flat or terraced vineyards exist alongside vines planted on impracticable slopes so steep that common sense would advise against cultivating them. These sloping plots are known locally as ‘costers’.

The D.O.Q. Priorat is made up of twelve production areas, each with different geographical, environmental, climatic, winemaking, social, historical and economic factors which make their wines unique. Bellmunt del Priorat, Gratallops, El Lloar, La Morera de Montsant, Porrera, Poboleda, Scala Dei, Torroja del Priorat, La Vilella Alta, La Vilella Baixa, and the areas of Masos de Falset and Solanes del Molar can use the term ‘Vi de Vila’ (village wine) on their labels if the wines are made exclusively with grapes from just one village, thus representing the precise typicity of a specific terroir.

The ‘Vi de Finca’ (estate wine) designation is a step up from the village wines. It is the top distinction a wine can receive in Catalonia and must comply with extremely strict requirements. The maximum yield accepted for grapes for a Vi de Finca wine is 15% lower than that set for other wines from D.O.Q. Priorat. The wine must be produced using grapes exclusively from vines on one specific winemaking estate whose name must be linked to the wine’s name. It has to be processed, bottled and aged in their own cellars by the same wineries which own the vineyards or in exceptional cases by neighbouring wineries. Their production and ageing processes must be completely independent from other wines and easily identifiable. Furthermore, the wine must have a consolidated and reputed history of quality reaching back at least ten years, At the end of 2018, for example, only four D.O.Q. Priorat wines had earned this designation: Clos Fontà and Coma Blanca (from Mas d’en Gil Viticultors), and Clos Mogador and Mas de la Rosa (Vall Llach).

Vineyards are planted at heights ranging between 100 metres above sea level at Bellmunt del Priorat and El Molar, to 750 metres at the highest parts of La Morera de Montsant and Porrera. The degree of inclination of the slopes between 15 and 60% bears a huge influence on how the land is worked. Steeper plots cannot be farmed using mechanical techniques so traditional methods are still commonly in use here.

Soil and climate create a very demanding environment in the Priorat but also mean that the Priorat grapes and wines are beyond compare. Yields are low and the Grenache and Carignan (recommended local red grape varieties) are extremely concentrated and expressive. Other red grapes such as the Cabernet Sauvignon and Syrah also produce a good must which often forms part of a final blend but they seldom reach the level of expressiveness and typicity of the local varieties. The best Priorat red wines are intense, mineral and complex. Grenache Blanc is the most popular grape used for white wines which are much less common than reds, though Macabeo and, especially, Pedro Ximenez grapes often embellish wines with a particular warm character and aromas of spices and wild tones.

Overall, Priorat wines are powerful ones – a fact easy to guess seeing the soil and climate they come from. Temperatures are high, rainfall low, and the slate soils are poor and dark. This has led to a particular way of life and an unparalleled style of wines which have maintained their essence and transmit it to the drinker through every bottle. Over time they have become more rounded and balanced but they still offer a somewhat inexplicable magical touch, which is perhaps what enchanted the Carthusian monks all those centuries ago. 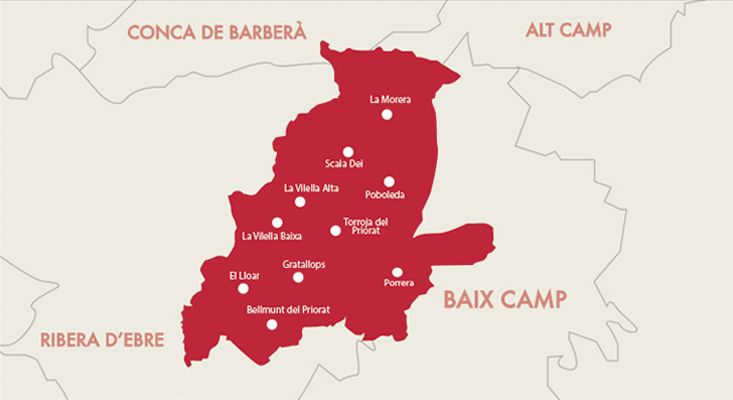