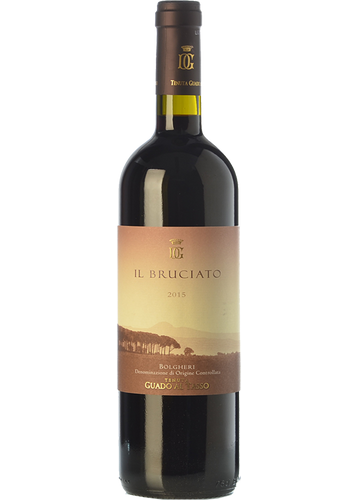 Tenuta Guado al Tasso is a winery located in the Bolgheri denomination, in the same part as some of Italy's most renowned wineries and the cypress trees of the Viale dei Cipressi, the avenue which the Nobel Prize winner Giosuè Carducci immortalised in his poems. Here the winery possesses about 300 ha of vineyards which extend from the Tyrrhenian Sea coast right up to the hills.

Il Bruciato is the younger sibling of Guado al Tasso, the company's emblematic wine, and in comparison it shows greater immediacy and liveliness. It's made from a selection of Cabernet Sauvignon, Merlot and Syrah grapes originating from the winery's vineyards, with management in the expert hands of the Antinori family and under rigorous quality standards.

Once in the winery, the Cabernet Sauvignon, the coupage's predominant variety, ferments for roughly two weeks at 30 degrees, whereas the Merlot and Syrah do so at a lower temperature in order to keep their varietal aromas unchanged. After fermentation, the wine will undergo 8 months of ageing in barrel, followed by another 4 months of refinement in bottle before being released onto the market.

Appearing a dark ruby colour, Il Bruciano offers an expressive bouquet that reveals notes of forest fruits, flowers, terracotta, leather, tobacco and sweet spices. On the palate, its outstanding features are its coherence, its balance and the slight harshness of its tannins, which provides the earthy touches which we'd been able to discern on the nose. It ends with a long finish exhibiting pleasant fruity touches.

Very interesting smell, but quite average in taste

Supertoscan with a very intense, pleasant smell. In taste quite monotonous, balanced but short. I recommend to spicy dishes, with salami and expressive sheep cheese, for example peccorino

Really good and promising even more

Still young and needs aeration, but already balanced and layered on the palate. Earthy, rustique and roasty, with some nice fruits and berries. Delicious.

This wine is of very good quality, very fruity with forest berries on the nose and very soft uniform taste, goes well with grilled stake.

but it will probably get more balanced and smooth in a couple of years. Very nice wine. Just buy it.

This wine worth more than 20 pound. Fine tuscan wine from Antinori house.

The Antinori family has been dedicated to the production of wine for more than six hundred years: ever since, in 1385, Giovanni di Piero Antinori became a member of the winemakers guild - Arte Fiorentina dei Vinattieri. Throughout its long history, spanning 26 generations, the family has always managed this activity directly, making innovative and sometimes courageous choices, but always maintaining unaltered respect for tradition and for the territory. Today the company is...