FINAL SALES! Up to 15% off
Regions/Spain/Rueda

Rueda. Verdejo. Two words that sum up a region and its main grape variety. Inextricably linked, these two words stand for the overwhelming commitment shown by the wine-producing region to this native white variety, maximizing its potential to an extent never envisaged. This has resulted in an excellent white wine that has brought fame to its producers and to Rueda - the goose that laid the golden eggs - both nationally and internationally.
View more
VerdejoWhite wineSauvignon Blanc

Rueda. Verdejo. Two words that sum up a region and its main grape variety. Inextricably linked, these two words stand for the overwhelming commitment shown by the wine-producing region to this native white variety, maximizing its potential to an extent never envisaged. This has resulted in an excellent white wine that has brought fame to its producers and to Rueda - the goose that laid the golden eggs - both nationally and internationally.

With similar properties to the white Sauvignon Blanc variety, also widely-grown in the region, Verdejo wines show very characteristic varietal aromas of fennel, fresh herbs and apple, while proving fruity, smooth and extremely elegant on the palate. In addition, they are perfectly suited to barrel fermentation, becoming more complex with an unctuous texture, and are thus provided with a much longer lifespan.

The majority of the vineyards are located to the south of the province of Valladolid and to a lesser degree in Segovia and Ávila. Locally the climate is continental with dry cold winters, while the hot summers with cool nights assist the grapes to reach optimum ripeness. The sandy and silty soils allow good aeration and drainage, both factors which have an affect on the wine's personality.

The origins of winemaking in the area which is now the D.O. Rueda appellation date back to the Middle Ages. During the reign of King Alfonso VI, the Verdejo grape arrived in Spain thanks to the Mozarabs, Christians living here under Moorish rule, who resettled the valley of the River Duero following the Christian reconquest. During the Spanish Golden Age, in the 16th century, the most famous wine in the region was also called Golden wine, a mature kind of rancid wine which underwent static ageing outdoors and was considered to be the wine of the Court of the Catholic Monarchs, Isabella and Ferdinand. Under their protection and that of King Carlos I who succeeded them, this region saw many more vines being planted and wine becoming widely produced.

In 1911, a Royal Decree declared wine from Medina del Campo to be a special wine similar to Jerez and Malaga wines in style. In contrast with these, though, the Medina del Campo wine gained in value, the older it became.

In 1980 the area was accepted as a Designation of Origen (D.O.) appellation, the first in the region of Castile and León. This designation has also included red and rosé wines since 2008.

The D.O. Rueda appellation has almost 14,000 hectares of vineyards, most of which are planted with white grape varieties. Yields for trellis vines of white varieties are set around 10,000 kg/ha, while for red ones the limit is set at 7,000 kg. Regarding vine density, for goblet-pruned bush vines the minimum is set at 1,110 vines per hectare and 2,220 for trellis vines. The most common system allows 3x3 metres for bush vines and 3x1.5 metres for trellises.

Winters are long and cold, with temperatures often dropping below freezing. Springs are short-lived and are sometimes interrupted by late frosts, which can delay the pruning period. Summers are very hot and sunny – however, despite the heat, the grapes do not dry out as they ripen late too. The lack of nutrients in the upper layers of the pebble and gravel-covered alluvial soils means the vines must dig deep for their roots to find the necessary nourishment to survive. Atlantic winds from the west and south-west bring about a reasonable amount of rain in autumn, though the annual rainfall recorded is low on the whole which is made up for by the use of drip irrigation. These seasonal factors taken together with significant day-night temperature differences during the growth period mean we can consider Rueda’s climate as a continental one even though it is located to the south. The sugar plants generate during the day thanks to the intense sunlight and high temperatures, contrasts with the acidity the cool nights guarantee, bringing about perfectly balanced wines with a good level of acidity and delicious fruit.

New farming practises and aid from the European Union for restructuring the wine industry have breathed new life into the world of wine in Rueda. The Palomino Fino is the only variety with some old vines which will not be replanted as the D.O. does not authorize new plots of this grape, considering it to be unsuited to the region and the style of wines being produced nowadays in Rueda.

The D.O. Rueda appellation specializes in the production of white wines, in particular Verdejo ones. This variety is not only perfectly suited to the tough environment but these conditions actually bring out the best of it. The Verdejo vine has small leaves, and medium-sized bunches and grapes. Another variety which thrives in Rueda is the Sauvignon Blanc – it also has small leaves, small fruit, and ripens early. Its tropical aromas are unmistakable.

Other grapes such as the Macabeo (12%) or Palomino Fino (3%) were common in the past but have fallen out of favour now. Winemakers from Jerez introduced the Palomino Fino to the Rueda region in the 1930s. As it usually gave good results, they believed they would be able to produce wines similar to those made in Andalusia but it is now barely used. The Viura variety, an emblematic grape from Rioja, was also planted here in the 1950s and used for barrel-aged crianza wines before the virtues of the Verdejo were eventually discovered and this grape went on to become the most commonly cultivated one.

Sauvignon Blanc arrived in Rueda in the 1970s and swiftly showed it was suited for this area too. Its short growth period which helps it in cold regions like the Loire means it acclimatizes perfectly to the high-altitude (600-800 metres) vineyards of the Rueda appellation. Its flowery and fruity character contribute to the promotion of the international image of the region.

Apparently, red grapes were common in Rueda before the phylloxera outbreak but afterwards they practically disappeared from the area and were seldom replanted. In 2008, the D.O. governing body accepted the use of red grapes once more and the production of both red and rosé wines, mainly based on the Tempranillo grape.

Modernization means that at present roughly 95% of the fruit is harvested mechanically. This is carried out at night to avoid sunlight and high daytime temperatures which could oxidize the must.

The Rueda Verdejo is the unquestionable king among the wines from the Rueda appellation. When a bottle says ‘Verdejo’ on the label it means it includes at least 85% of this grape, and in fact many are often single-variety Verdejo wines. They have a straw-yellow colour and a splendid aromatic potential. Extremely elegant on the nose, they exude crisp fruity aromas (apples and ripe citrics which seem tropical in warmer vintages), hints of aniseed and fennel, and a slightly bitter and herbaceous finish, so typical of this variety.

In a similar way, if the wine is labelled ‘Sauvignon Blanc’ it is guaranteed to include at least 85% of this French variety which was originally brought to Rueda by the Marqués de Riscal winery in the 1970s. They are light and fresh wines, extremely fruity (grapefruit and passion fruit) with floral and herbaceous aromas and a strength ranging between 11º and 14º.

Wines labelled ‘Rueda’ contain at least 50% Verdejo in their blend, with the rest made up of Sauvignon Blanc or Macabeo, grapes that add acidity, floral aromas and lightness. Their colour is usually somewhere between pale yellow and straw and they maintain most of the intense character of the Verdejo, though somewhat diluted. Apart from these well-known wines, the D.O. Rueda also produces sweet dessert wines, traditional method sparkling wines, and crianza wines made with oxidative ageing under the name ‘Rueda Dorado’, a style of wine aimed at remembering popular traditional wines made in the past. Fermentation and ageing on their lees carried out in wooden barrels or concrete eggs have contributed to adding complexity and unctuosity to Rueda wines - leaders amongst Spanish whites.

Fruity rosé wines are also produced here, both sparkling and still ones, using a minimum amount of 50% of the officially authorized red varieties (Tempranillo, Cabernet Sauvignon, Merlot, and Grenache). Red wines represent a small amount of the total of Rueda wines, but there are a variety of styles ranging from young wines to Gran Reservas. 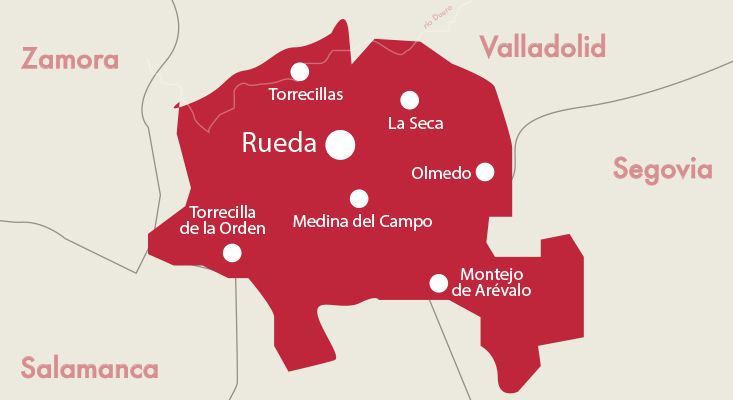