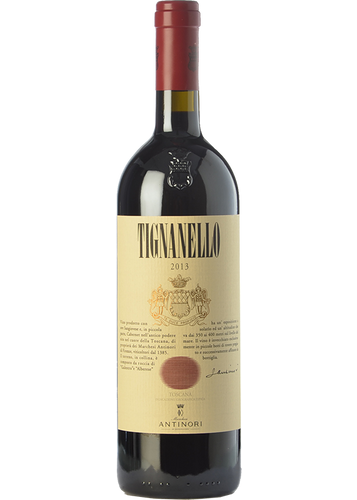 Tignanello, produced since 1971 only in the best vintages, is a wine that has had a profound effect on the history of Italian winemaking. Apart from being the first Sangiovese aged in barrel, it was also the first to modernise its coupage with non-traditional varieties. It's made from Sangiovese, Cabernet Franc and Cabernet Sauvignon originating from the vineyards of Tenuta Tignanello, the historic estate belonging to the Antinori family, where the vines cover an area of 57 ha and enjoy a south-westerly orientation, lying on limestone soils and at an altitude of 350 to 400 metres.

Tignanello appears a very bright ruby-red colour. On the nose, the complexity of the initial sensations is impressive, with a noteworthy presence of red and black berries and sweet spices. Following on afterwards are more masculine notes, of leather and pipe tobacco, on a balsamic background which provides overall profundity. On the palate it's enveloping, clean and fluid, with smoothness and freshness perfect balanced. A wine that converts the Sangiovese's power into absolute refinement. A real pleasure from the first to the last drop.

Every time we drink it brings back find memories of sitting at a restaurant on lake Como. Wine never fails to come up trumps. However, now getting pricey.

One of the best Italian wine

It is a very special wine! It can stay in the bottle for many years, however it looks ready for drinking.

I thought 2015 was incredible, now I know differently! Must experience wine which you will struggle not to drink! Incredible

The Antinori family has been dedicated to the production of wine for more than six hundred years: ever since, in 1385, Giovanni di Piero Antinori became a member of the winemakers guild - Arte Fiorentina dei Vinattieri. Throughout its long history, spanning 26 generations, the family has always managed this activity directly, making innovative and sometimes courageous choices, but always maintaining unaltered respect for tradition and for the territory. Today the company is...