This vine-growing region in Galicia, situated to the west and south of the province of Pontevedra and right in the heart of the Rías Baixas, has managed to place its white wines firmly on the map of great international wines. It is presently one of the Spanish DOs with the highest exports. Historically, according to tradition, it was the Cistercian monks of the Monastery of Armenteria who expanded the planting of vines in the 12th Century.

This vine-growing region in Galicia, situated to the west and south of the province of Pontevedra and right in the heart of the Rías Baixas, has managed to place its white wines firmly on the map of great international wines. It is presently one of the Spanish DOs with the highest exports. Historically, according to tradition, it was the Cistercian monks of the Monastery of Armenteria who expanded the planting of vines in the 12th Century.

The deciding factor in this success is the native white grape Albariño, which is a variety that responds well to careful nurture in the vineyard and to new techniques in wine-processing methods. This all results in very fresh, aromatic, fruity, characterful wines, thereby convincing any critics and winning over even the most demanding palates. Other less popular white varieties include Caíño Blanco, Treixadura and Loureiro, which some wineries use to blend with the main grape. Considered highly too are barrel-fermented Albariños.

With a markedly Atlantic climate, abundant rainfall and mild temperatures throughout the year, the Regulating Council divides this area into 5 sub-zones according to the soil type and micro-climate of each region: Val do Salnés, Condado de Ulla, O Rosal, Soutomaior and Ribera de Ulla. One of the distinguishing features of traditional vine-growing is the planting of vineyards, with vines trained on pergolas to protect them from the damp soil and allow them better exposure to the sun.

There is a certain degree of controversy regarding the historical relationship between the Albariño grape variety and the region of Rías Baixas. Traditional theories claim that monks from Cluny in France brought the grape to the Armenteira monastery in Salnés in the 12th century from where its cultivation spread around Galicia and northern Portugal. More recent theories, however, indicate that Albariño is probably a local variety which had always existed in southern Galicia or that it was brought from central Europe back in the 5th century with the migration of Germanic peoples such as the Visigoths and Suevis. Whatever the truth may be, the River Umia can be considered the home of the Albariño as it has been cultivated along the valley and used for wine production here ever since the Middle Ages. In fact Albariño has been cultivated in the Rias Baixas region for over one thousand years. Its characteristics make it perfectly suited to thrive in these climatic conditions.

It was Cistercian monks who first perfected the skills to make the best use of the Albariño variety. The best white wines were found in monasteries up to the 19th century when the Spanish government seized lands and property from the Church during the ‘confiscation of Mendizábal’ in 1836. This led to winegrowing passing into the hands of important or noble Galician families and estates. By the mid-20th century, winemaking eventually became more widespread and became a way of making a living for many people.

The granting of the Designation of Origen status in 1988 was the definitive push the wine industry of Rias Baixas needed. At that moment, the appellation was divided into three sub-regions within the province of Pontevedra: Val do Salnés, Condado do Tea, and O Rosal. The area of Soutomaior was added in October 1996, and Ribeira do Ulla in May 2000.

The D.O. Rías Baixas regulates the wines produced in a small region made up of Pontevedra and a small area of A Coruña in Galicia in the north-west of Spain. Winemaking has a long history in this region and ever since the governing body of the appellation was set up the wine sector has consolidated itself as a very important economic actor in the area. Over 12,000 jobs – temporary and long-term – are connected to the world of winemaking especially in the Salnes valley where 70% of the wineries are located.

One of the key factors behind the excellent quality of the Rías Baixas wines is undoubtedly the focus on local grape varieties; in particular, the Albariño which is used for over 96% of wine production. A grape with a strong character which loves the Atlantic climate and transmits its strength in every bottle. There are just over 4,000 hectares of vines in Rías Baixas divided among over 21,000 plots following the Galician tradition of smallholdings. About 6,000 winemakers work the vines, using traditional methods, pruning the trellis-trained vines and harvesting by hand.

The Rías Baixas climate is prominently Atlantic. Winters see low-pressure weather patterns from the west and south-west bringing heavy rainfall and gentle temperatures with little difference between daytime and night-time measurements. From time to time, cold Arctic air or anti-cyclones pushing the low-pressure zones northwards can cause temperatures to drop below freezing. The average temperature in January, the coldest month of the year, is around 10 degrees. Rainfall is mainly concentrated in winter which sees about 600 mm of the annual average of 1,600 mm. Springs come early with plenty of rainfall. The threat of a springtime frost affecting the grape blossom is a real one but, fortunately, not too common. By the start of summer, the Azores High anti-cyclone moves in over the western Atlantic and forms a barrier meaning rainfall becomes scarce, and temperatures, gentle. As autumn arrives, rainfall increases. Overall, the influence of the sea moderates temperatures and keeps relative humidity high. Rainfall is plentiful but decreases following the course of the River Miño, meaning grapes ripen earlier in the Condado do Tea area, named after the River Tea – a tributary of the Miño. 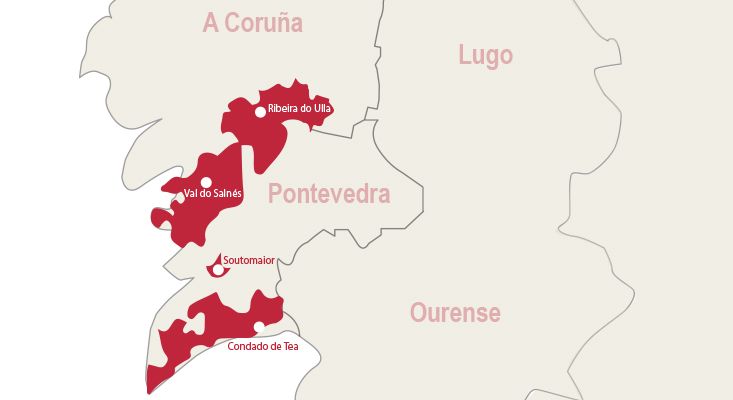