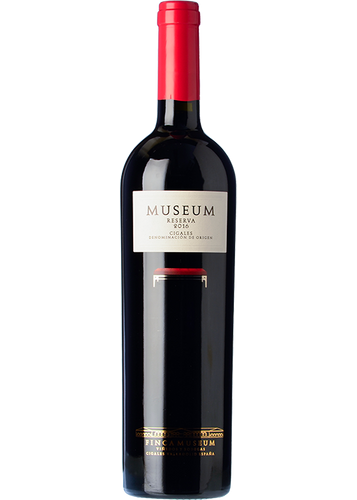 The Finca Museum winery was the first project developed by the winemakers Grupo Barón de Ley outside of La Rioja, where they started out. Committed to finding other top vineyards, they chose the appellation of Cigales where they could obtain a good quality/price relationship for their wines and perfectly ripened grapes thanks to the pebble covered soils here, home to vines over 70 years old.

The DO Cigales has a solid reputation in the world of rosé wines, but for some reason their excellent red wines don't share the same popularity. However, the Museum Reserva dispels any concerns regarding red wines from here. One of the few reservas produced in Cigales, it is aged for 24 months in new French oak barrels during which time the wine is racked five times. Following this ageing, the wine stands in the bottle for 12 months before being released onto the market.

An intense and elegant red, combining the best aspects of a wise ageing process with the maximum fruity expressiveness of the Tempranillo. Toasted and roasted aromas embellish a ripe fruit which refreshes with hints of spice. It is complex and structured in the mouth, but also balanced and noble. A splendid red wine with intense minerality which is sure to convince anyone who tries it.

Every now and then you take your first sip of something new and it just melts you. That's what this bottle did for me. Promising on pouring with a rustic cherry look about it. Bold flavours of blackberry, plum and oak with a hint of black raisin. Average acidity and tannins made my taste buds "dance" with each taste. My mouth was actually watering between sips. This was wine heaven for me. I can't wait to order my next bottle.

I was looking for some Museum wine and found Vinedos quickly on the net, the price was great, web site very easy, delivery from Spain very fast and I was kept informed of delivery progress daily, very impressed. Then the wine was delicious, full bodied, deep lasting flavours, superb with lamb and on its own. 5 star rating

A consistently good wine from my experience. It has presence without being overbearing. The variety of red berry flavours makes this wine a great accompaniment to game meats yet it remains an easy drink when you have the time to sit and savour it. Yes, make time to drink this wine!

Interesting exhibit from the Museum

I had never tried a Cigales wine before but I was impelled to try the Museum Reserva mainly due to its provenance (part of the Baron de Lay and Coto Group I found it a surprisingly elegant and balanced wine equal to Ribero Reservas. The price is good and it will improve with age.

Finca Museum was the first winery set up by the winemaking group Barón de Ley outside of its home territory of La Rioja. Committed to expanding into new wine regions offering a good relationship between quality and price, the group decided to open a new winery in Cigales first, starting out with a unique and spectacular vineyard where 100-year-old vines thrive in pebble-covered soils to produce perfectly ripe fruit. Successfully expanding, the winery now...