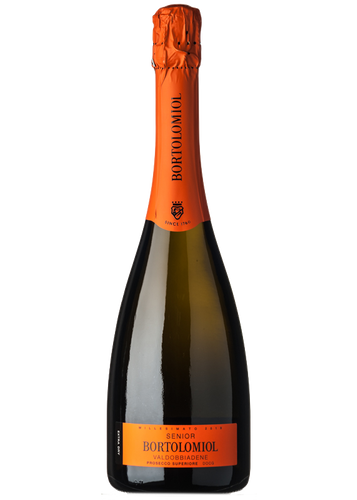 The Senior is the Valdobbiadene Prosecco Superiore Docg par excellence, the Latin name is comprehensible to all, including at international level, such as the name "Prosecco". For many years Prosecco di Valdobbiadene sparkling wine was known only as Extra Dry for its natural sweetness and sugary residue. Today, that Bortolomiol has in its traditional line 4 variations of taste of Valdobbiadene Prosecco Superiore Docg, the number "II" on the capsule indicates that it is the second in the gradation from the driest to the most sweet, while the name Senior recalls its birthright .

Its balanced dose of residual sugars and its enveloping aromas give it softness and great usability. It is wine for all occasions: as a drink with friends at the bar, as an aperitif but it is in the kitchen that it finds its maximum exaltation. Try it with vegetable soups and, why not, with fried brains where on the one hand the residual sugars respect the sweetness of the dish and on the other the freshness together with the carbonate well control and balance the fat sensations.

Fresh pear and floral notes with a sweet and persistent finish. Great prosecco to taste when the sun is setting!

The name of Bartolomeo Bortolomiol can be found in documents associated to the world of wine dating back to the mid eighteenth century. Bartolomeo dedicated all his life to cultivating vines on the Valdobbiadene hillsides, working with a love for the land and a talent for making the most of its qualities, which has been transmitted down through the family, generation after generation. The founder of the current winery which specializes in sparkling wines, Giuliano Bortolomiol,...