We are sorry for any inconvenience this may cause you and hope to see you back on our e-commerce very soon.
Due Palme, 15% off the great Primitivos, the Italian Malbec1h 17m 58s
Home/Wineries/Codorníu 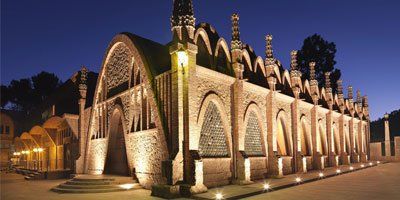 With its origins dating back to 1551, Codorníu is considered to be Spain's oldest family firm, the winery that pioneered Cava production and a very fine brand right from the onset. Codorníu is a prestigious winery, historic, capable of combining tradition and innovation, well-regarded due to a constantly modern and elegant image and to high quality products, identifying with the terroir and made with great respect shown for Nature.

Josep Raventós produced his first bottle of Cava in 1872, according to the traditional method and using the typical Penedès varieties. It was then known as Codorníu champagne and began to become famous, because of its quality and quite remarkable production method, but also due to its original advertising posters, illustrated by artists belonging to the modernist art movement prevailing at that time, including such famous names as Ramon Casas. Avant-garde too was the new winery building, built in 1915 and designed by a famous architect, a student of Antoni Gaudí: Josep Puig i Cadafalch. It was an innovative building, whose structure had already taken gravity into account to complement the production process by natural means; it was declared a National Historic and Artistic Monument in 1976. A visit to the Codorníu cellars, with more than 33 km of underground galleries excavated to a depth of up to 22 metres, in addition to the whole complex of architecturally significant buildings and museum, constitutes today not only a wholly recommendable experience but also a genuine history lesson.

The winery itself is located in the town of Sant Sadurní d'Anoia, in the Penedès region, but the vineyards are distributed over three Catalan denominations: Penedès, Costers del Segre and Conca de Barberà, three areas differing in soil types and climatic influences, which results in wines with a distinct character and complex coupages. The varieties grown are both the Cava classics (Macabeo, Xarel·lo and Parellada) and the international Chardonnay and Pinot Noir, among others. In their desire to achieve excellence, Codorníu's vine-growing and wine-making teams are continually experimenting with new techniques in cultivation and vinification, introducing the use of tanks that vary in capacity, with some very small ones, and made of various materials (different oaks, concrete, amphorae...) in order to obtain ever better and more singular products.

Although over recent years Codorníu has introduced still wines and a range of semi-sparkling wines to capture the younger market, its most emblematic brand continues to be Anna de Codorníu, the first Cava to incorporate the Chardonnay variety and the range which honours the lady who created the link between the Codorníu dynasty and the Raventós family. Jaume Codorníu and Codorníu Reina María Cristina are the other two most renowned Codorníu labels, the two entry level cuvées in this line's top range, where we also now find the exceptional Cavas of the Gran Codorníu series, very low in production, genuine single estate wines matured in cellar for 70, 100, 120 months or more.

Besides the historic winery in the Penedès, the Codorníu Group has many projects in other denominations in Spain and worldwide, totalling more than 3,000 hectares of vineyards in its possession: Raimat (Costers del Segre), Masia Bach (Catalunya), Scala Dei (Priorat), Abadia de Poblet (Conca de Barberà), Bodegas Bilbaínas (Rioja), Legaris (Ribera del Duero), Séptima (Mendoza, Argentine), Artesa (Napa Valley) and Nuviana (Valle del Cinca). Present in all 5 continents and with a team consisting of over 800 personnel, in just the last few years, the Codorníu Group's catalogue has received in excess of 150 international awards for its wines and Cavas.