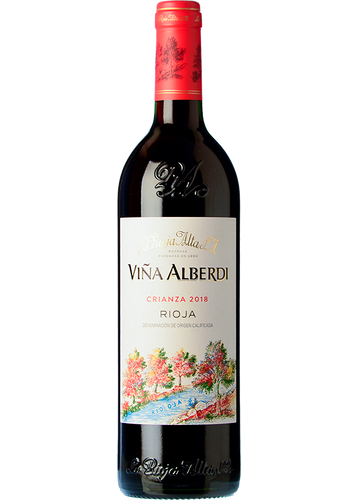 Viña Alberdi is a classic and one with character. Describing a wine as classic can sometimes seem too easy or even appear an over-simplification of its personality, which couldn't be further from our intention. It is a classic, three times over: not only in colour, but on the nose and on the palate. Classic as synonymous with having great merits, being particularly appealing, very versatile gastronomically and the sort of wine that always tempts you to come back for more. A classic, and not just another Rioja, this is a wine brimming with fine attributes.

Viña Alberdi is named after Don Nicolás Alberdi, the winery's president from 1947 to 1952, and its first vintage year was 1974.

Viña Alberdi exudes an excellent aroma, very fresh acidity and well-integrated oak; it's fruit-forward and has a most pleasant finish, with refreshing notes of pine needles. A wine which, even though it doesn't attain the same seriousness as some of the house's emblematic wines, is certainly not lacking in elegance or seduction. Its aromatic complexity, with aromas of Morello cherries, ripe fruit, orange peel, humus, tobacco, wax and leather, intensifies on the palate and offers a mix of seriousness and sensuality.

While I had loved everything coming out of La Rioja Alta SA, since 1992, the recent surge to higher alcohol levels, to 14.5%, is very disappointing as it changes the taste In the wrong direction. Not just Alberdi, but latest Ardanza too disappoints.

Excellent Rioja at an affordable price.

Unfortunately many of the wines sold as Rioja (particularly some of those sold in UK supermarkets) are poor and in some cases unpleasant. Vina Alberdi 2010 is instantly recognizable as Rioja as it used to be, when it first became popular in the UK.

One of the biggest bargains in Spanish wine. Lovely wine to drink without food, which also stands up to the cheese course. Would benefit from a few years in the bottle but perfectly drinkable right now too.

The younger sibling of the the ever reliable Ardanza, this is a a cracking crianza. A real mouthful of rioja fruit but with soft tannins and wood flavours and with no need to uncork beforehand or decant.

Tasty and good value Rioja from this excellent producer

La Rioja Alta produce one of my favourite wines in Vina Ardanza but this offers a decent alternative at a more affordable price point. Smooth, easy drinking and pairs well with a wide range of foods.

La Rioja Alta is one of Rioja's historic wineries, creator of such emblematic brands as Viña Ardanza, Viña Arana, Viña Alberdi, Gran Reserva 890 and Gran Reserva 904. All its wines are excellent and clearly exemplify what it means to be a great classic Rioja today, in the present. Their wines are elegant, complex and sophisticated like those of yesteryear, but with more body, colour and robustness, wines adapted to today's gastronomic demands. In short, a...