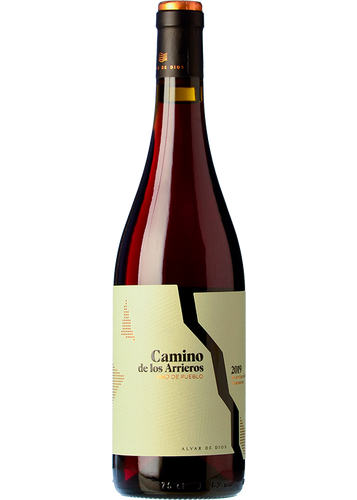 A village wine from Villadepera in the region of Castille and Leon. Old vines of traditional varieties known locally as Trincadeira, Bastardo, Mandon, Mencía, Rufete, Gajo Arroba, Tinta Jeromo, Grenache and Juan García, alongside other less well-known ones, including some white varieties. The wine is named after a local transhumance seasonal migration route along which many of these grape varieties may have originally travelled.

Camino de los Arrieros displays a splendid ruby-red colour and transparent body. A very fresh wine with a relatively low alcohol content (11.5%) and impressively expressive. Suggestive aromas of strawberry sweets wrapped in lactic touches and floral fragrances. Pepper, scrubland and eucalyptus swiftly move forward to delight like a fresh breeze. It has a somewhat aery character and a fine tannicity thanks to harvesting grapes and stems at just the right moment. Aromas of sloe juice, cranberries, and pomegranate also delight the nose. It bears a certain similarity to Gredos wines thanks to the combination of etherealness, minerality and a charming wild tenderness.

To favour its light character, it is best served around 14ºC in a Pinot Noir style glass or a standard red wine glass.

Despite its apparent fragility, if the conditions are right it can be kept for up to 5 or 6 years after its harvest date.

Mostly organically-grown grapes, crushed traditionally by feet, and fermented with local yeast from the vineyards. Vinified using stems and aged for between 6 and 8 months in wooden barrels. Bottled without clarifying or filtering.

Villadepera is a small village in the province of Zamora on the western side of the Castille and Leon region. Declared a biosphere reserve by UNESCO, the area's biodiversity is protected. It was a volcanic region millions of years ago which explains why nowadays the soil is principally made up of different kinds and colours of slate depending on the mineral content.

Villadepera is the northernmost village in the mountains of the Arribes del Duero natural park, at an altitude of 850 metres above sea level. Camino de los Arrieros is made with fruit collected from 20 small plots spread around the area.