Álvaro Palacios describes his exquisite and highly esteemed wine L’Ermita as a wine for intimacy, for which no words are needed, just emotion. L’Ermita caresses all our senses with a texture that defies description and a power shrouded in touching finesse; truly moving.

Winery's evaluation of the vintage

The winter saw regular and moderate rain, alongside temperatures lower than those of the two previous vintages. However, everything changed in spring. Only 60 litres of rainfall were registered between March and May, representing a mere quarter of the average amount in this region. At the same time, temperatures were a couple of degrees above normal, causing an early budding and flowering. The fruit set of the Grenache grapes was almost 100%, but the rains so needed for the plants to flourish stayed away, except for a little, and insufficient, drizzle in June.

The dry and stifling spring was followed by a hot summer with temperatures hitting highs of 47 degrees celsius. This led to the grape harvest starting on one of the earliest dates in recent history. International grape varieties used for the Camins del Priorat wine were collected during the last few days of August — the grapes were small and sparse compared to previous years. However, the indigenous vines — especially the older Grenache and Carignan ones — once again revealed their Mediterranean character, producing top-quality fruit despite all the hardships.

Perhaps it was the fresh yet intrinsically humid sea breeze that helped this miracle, producing flavoursome wines with a high concentration and lively acidity. The 2017 wines exude energy and strength, joy and beauty. Honest wines to conquer the hearts of all those who try them. 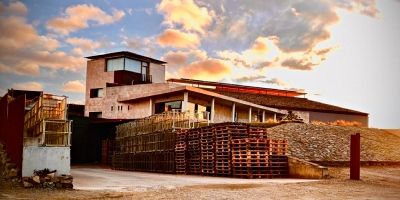