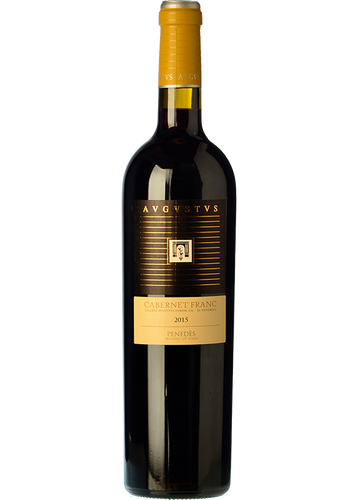 There are very few wineries which have carved out such a reputable name as Augustus Forum by opting strongly for quite an unusual grape in the production of single varietals. On the estate at El Vendrell, 3 km from the sea, a small winery surrounded by vineyards, in the purest Bordeaux style, conceals a limited number of bottles of this extraordinary Cabernet Franc which already has a long and successful track record behind it. Perhaps its scant production is the reason why it's not so well-known as the house's Chardonnay, or the superb Forum vinegars, which now have their allotted place in the kitchens of Spain's best restaurants.

At Augustus Forum, the Roca family, with brothers Albert and Oriol clearly heading up the project, appreciate as few do the merits and requirements of the Cabernet "younger sibling"; this can only explain why the wine is so recognisable each year but without failing to express the character of the vintage. It's always an elegant wine, robust, pleasant, and complex too. It has all the character of a good French Cabernet cloaked in Mediterranean warmth and a clever usage of oak. Menthol, spicy, brimming with ripe fruit and substantial toasty notes, generous, full and long. Matorral shrubs, cherries in liqueur, liquorice, pepper, graphite, blue flowers... it doesn't stop growing. Without a doubt, a magnificent example of this varietal's capabilities.

A reference and pioneer among Spanish Cabernet Francs, the Augustus Cabernet Franc is undoubtedly a wine delivering the style of its winery and the character of this variety. While many other Penedes wineries bet on the Cabernet Sauvignon or Merlot grapes for their single-variety wines, the Augustus winery chose to go with the so-called little brother, the extremely elegant Cabernet Franc, using it to create a wine which is easy to drink but whose noble character comes through with every sip.

A great combination of the Cabernet franc grape in a Mediterranean climate. Still has the classic Cabernet franc flavours but warm, rounded, and easy to drink. I keep coming back for more of it at this price

An all round excellent wine

Cellers Avgvstvs Forvm is a small family-owned winery located in the Baix Penedès region. In 1983 they acquired a property that lies right alongside the ‘Via Augusta’, and named the winery after this old Roman road. The land, with its calcareous soils, fairly shallow and stony in texture, was converted into vineyards which offer a glimpse of the Mediterranean Sea. Later on, in 1990, after they had carried out some highly successful field trials in growing vines, they decided...