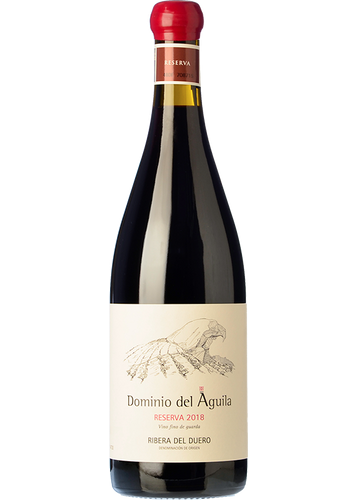 Dominio del Águila Reserva is an extraordinary wine. Within a very short space of time, it has been catapulted to the podium of great Spanish red wines, and its prominence has remained and been confirmed in successive vintages. Easily recognisable is its Ribera character but with less opulence than usual and greater elegance. Fragrant and mysterious on the nose, vigorous and with substantial balance on the palate. If a comparison had to be made with another wine, it would be a Vega Sicilia, precisely because of its individual, unique character.

An aromatic, expressive and floral wine, it adds subtlety and freshness to the typical character of Ribera del Duero wines it confidently displays. Its elegant and lively style has won over international critics and placed it among the very best Spanish red wines. It undoubtedly deserves this reputation thanks to the energy, emotions and balance enjoyed with every sip.

Dominio del Águila Reserva is made from old vine grapes growing on the slopes of different hills around the village of La Aguilera (Burgos). They are mainly Tempranillo vines but there are other red and white varieties such as Albillo too.

Founded in 2010, Dominio del Águila is where Jorge Monzón and Isabel Rodero’s dream of creating elegant and pure wines has come true. Organic wines, suitable for laying down for a long, long time but also perfect to be enjoyed at any time. Following in the footsteps of generations of winemakers and having studied at the Universities of Bordeaux and Burgundy, Jorge has an impressive background in the world of wine: his experience...