-15% on the most coveted wines!
Italy/Lombardy/Lugana DOC/Cà dei Frati Lugana I Frati 2021 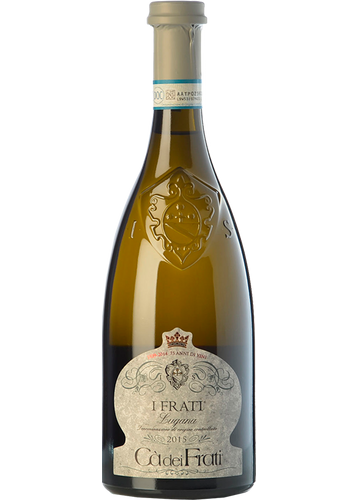 The Friars of Cà dei Frati is a symbol for the company, it is the most representative wine, which best expresses the terroir of the production area: south of Garda, with the presence of calcareous clay soils. Created from Trebbiano di Lugana grapes, this wine has succeeded in making the world known to a lesser known native vine.

Among the most sincere and classic Lugana, I Frati is a wine designed to be consumed in the vintage, with a marked freshness and fragrance, but it is also appreciated in the refinement, which gives surprising sensations. White flowers, almond, apricot and balsamic notes follow one another in the smell, next to mineral scents that evolve over time together with spicy and candied fruit memories. In the mouth it is fresh, exuberant, profoundly sapid, full-bodied and large, with a rich and substantial persistence. It goes well with fish dishes, such as raw fish (tartare and sushi), fried fish, pasta with seafood and steamed shellfish. Also excellent with pizza. The company Ca 'dei Frati has been known since 1782, as attested by a document that refers to "a house with a cellar located in Lugana in the keep of Sermion called the place of the Friars". In 1939 Felice Dal Cero, son of Domenico, already a winemaker in Montecchia di Crosara, in the Verona area, moved to that house, in Lugana di Sirmione, immediately sensing the high wine-growing vocation of the area. After thirty years of work in the vineyard and in the cellar, in 1969, his son Pietro took part in the birth of the Doc, starting to bottle his first Lugana Casa dei Frati label, later called Ca 'dei Frati.

We are conservative in our wine drinking and Lugana is one of our three white wines of choice at home and certainly in Italy. And of those I have experienced Cà dei Frati - 'I Frati' is definitely the best. Added to which the price and service from Italvinus is exemplary.

I had this wine in Lake Garda I loved it then and I love it now from vinissimus. Delicious fruity and crisp

Tasted this at a friends - nice fresh white wine chilled for a warm evening. Lots of fruity flavour. Struggled to find it in UK at reasonable price but then found it here and was so much cheaper on vinissimus than we could find anywhere else.

We have admired Lugana wine for several years and always seek it out in Northern Italy. So we were delighted to find Italvinus supplies it at an attractive price. And their service is first class.

Ordered for the first time from Italvinus. Swift delivery, I was well informed throughout and super wine delivered. Highly recommended service and wine