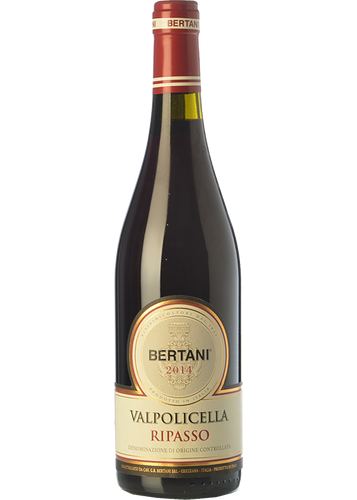 From the best Valpolicella Classica and Valpantena vineyards, which are the source of Casa Bertani’s exceptional range of wines, comes this splendid Ripasso, from soil which is as much limestone-marly as it is sometimes volcanic. The technique is standard: after the first fermentation in steel that takes place after the harvest, there is a second one, around March, which "runs back" the wine over the skins of the Amarone, which, far from being exhausted, are still really rich in extractive substances and native yeasts.

Be it Amarone in miniature or top-notch Valpolicella, Bertani's Ripasso is even further increased in stature by the exceptional nine-months’ aging in large 50 hl barrels which exalts the hybrid nature of this wine, which is young but well-developed and well-rounded at the same time, with a distinctly opulent personality set against a background of untamed youthfulness.

From its intense, dark and determined purple colour with hints of violet, this Ripasso hits you with its intense, crisp and broad ripe red fruit bouquet. Then follow deeper dark fruit notes, such as blackberry, blackcurrant and ripe cherry, jammy cherry and at times cherry in alcohol. Even though it is velvety, harmonious, full-bodied and intense, it is also sprightly and sleek, which contributes to its crisp, fruity and varietal nature and the interesting flavour, which just screams out to be drunk.

Excellent wine to have with some rich tomato pasta

I bought this wine as I am visiting the Bertani winery in April. I wanted to see if I liked the wine before I went. It turns out that I really like the wine. I had it with a rich, slow cooked duck leg pasta, and it was a perfect match.

Like all the Bertani wines I have tasted this wine continues to excel. While it is not as full of flavour as some of the more expensive Bertani wines it is still a great wine. We intend having it as our main wine on Christmas day.

Certainly a rich and complex Ripasso

Takes its time to unfold. Needs sufficient breathing in our climate in Northern England! Almonds and soft fruits and nice mouthfeel.

Typical ripasso. Good, but not outstanding. Lacks a little more depth. Would rather choose another ripasso even for this money.

After having been a pupil of Dr. Guyot in Burgundy, in 1857 Gaetano Bertani returned to Venice to put into practice the most modern systems of vine cultivation. As a result of this, the Bertani name has passed into both Italian and European wine history as the winery that brought to the Valpolicella the fundamental technique for producing wines in the classic style and impeccably balanced. Held in high regard since the 19th Century and served at the most exclusive tables of...