Within a very short time, Viña Zorzal has become an absolute benchmark among Navarra wines. The bird on its labels is a symbol which we unquestionably associate with excellent quality wines...

Within a very short time, Viña Zorzal has become an absolute benchmark among Navarra wines. The bird on its labels is a symbol which we unquestionably associate with excellent quality wines originating from the Navarra DO, and also from the Rioja DOQ, under the name of el El Inquilino.

History of a predictable success

The origins of Viña Zorzal date back to 1989, the year when Antonio Sanz fulfilled his dream of producing his own wines in Navarra, after spending his life dedicated to the world of wine. In 2007, this new stage resulted in the creation of a company which Antonio’s own sons helped to shape, adhering to the philosophy their father had instilled in them from an early age with regard to meticulous care of the vineyard. Viña Zorzal Wines started out with a prime objective, to retrieve Navarra’s indigenous varieties, which had been so neglected, and to produce varietal wines that would be appreciated for their authenticity and simplicity, could speak for themselves, and be affordable for all.

During those initial years, the work done by the Sanz brothers with the Graciano grape began to bear fruit and receive recognition from the most important critics. The next step was to take on Navarra’s historic variety: the Garnacha. A short distance from the winery, they discovered some real treasure, very old abandoned vineyards in the district of Fitero, where the Ebro Valley ends and the Iberian Mountain System begins. These enabled them to focus their Viña Zorzal project on the land, on producing wines from a particular plot which display the typical characteristics of such a special area. From then on, Viña Zorzal wines haven’t stopped growing and accumulating praise, flying high, like the birds on their labels.

The philosophy which Antonio instilled in his children from a young age is seen reflected in the absolute care shown in their treatment of the vineyard, and in the respect shown in their wine production. Viña Zorzal Wines is currently managed by a team of four:

In Fitero and its surrounding area, the Mediterranean influence of the Ebro Valley disappears and gives way to a more continental climate, with very hot summers, very cold winters and big differences between day and night temperatures. The average annual temperature ranges between 13˚ and 14 °C, and the annual rainfall varies between 400 and 500 mm. The length of time favourable for vine growth is one of the longest in the Navarra DO, about 227 days.

The vineyards, planted with bush vines, lie on soils that are rocky and stony, of limestone and conglomerate clusters, with varying clays, which make them much more permeable and resistant to erosion than the soils of the Ebro Basin. The stones retain heat during the day and release it at night, encouraging the grapes to ripen; in addition, they serve as a protective layer which helps to retain moisture in the soil during the dry summer months.

The abundant flora surrounding the vineyard, and which Viña Zorzal is actively recouping, bears special witness to one of the oldest vineyards known in Navarra, an exceptional plantation of Garnacha vines aged 115 years old that had survived phylloxera.

In Corella, also in Navarra, the Mediterranean influence of the Ebro Valley is more notable than in Fitero. The annual average temperature is 13.3º and accumulated rainfall adds up to around 500 mm. The geography of the land is flat and the vineyards of Tempranillo, Graciano and Garnacha are cultivated on trellises. The calcareous-clay found in the soils is perfect for these local varieties.

Viña Zorzal practises organic viticulture with little intervention. The vineyards aren’t tilled and native plants are allowed to grow as ground cover. All work is carried out manually and the land is fertilised with compost in order to improve vine resistance to diseases.

The work follows the principles of minimal intervention. Fermentations are spontaneous, rackings are avoided, there’s no filtering nor clarifying, and no additive is used apart from sulphur, in very moderate doses.

The company / The group

Viña Zorzal has teamed up with Matías Michellini, a producer operating a winery in Argentina. Matías has put his own original stamp on several vineyards and the wines obtained combine all the character of the Navarra terroir and the mastery of a skilful grower from the other side of the Atlantic. The wines from Viña Zorzal Wines & Matías Michelini are elegant and delicate, subtle and expressive, with restrained tannins and an open character. 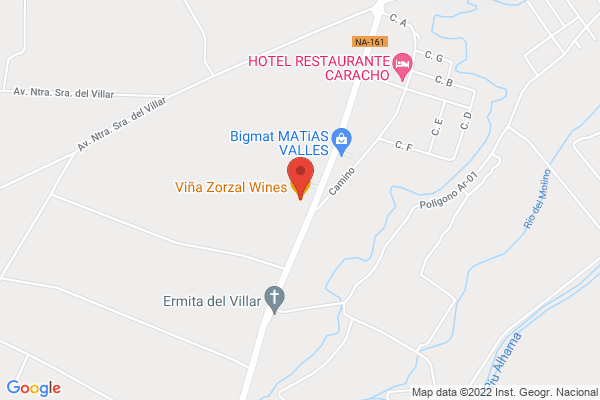