Masies d'Avinyó (Abadal) is the amalgamation of a land reclaimed and restored to the wine-growing tradition of Bages (a name bestowed by ancient settlers, paying tribute to the Roman god of wine, Bacchus), the modern approach of its owners and the innovative, willing spirit of a young, enterprising team with a single purpose: to produce wines of quality and great distinction, and with an aspiration: to make wines that have their own defining character.

The Bages region is located in the centre of Catalunya, at a distance of about 70 km from both the Mediterranean Sea and the Pyrenees. The ground is uneven and often requires terracing, the soil has a clay texture with a large amount of limestone, the rainfall is not very plentiful and the microclimate is full of contrasts. All in all, this is an area particularly well-suited to vine cultivation, as testified by the unusual vine huts, dry stone buildings that can frequently be found in the woods and vineyards. In fact, the 127 hectares of vineyards belonging to Masies d'Avinyó are surrounded by a further 150 hectares of holm oak and oak forests, where aromatic herb bushes are found growing, such as thyme, rosemary and oregano, and whichever way you look there are always views to be had of the Montserrat mountain range.

In the summer of 2006, Abadal opened their new facilities for welcoming wine enthusiasts, which include, in particular, an interesting wine museum (with barrels and objects aged over 300 years old ), an exhibition hall (transport and vehicles that have played their part in wine production since the Middle Ages) and a new air-conditioned tasting room: a project which the winery hopes will provide the region with some publicity, since despite being off the beaten track as regards wine tourism, it is a remarkably interesting area of great natural beauty. 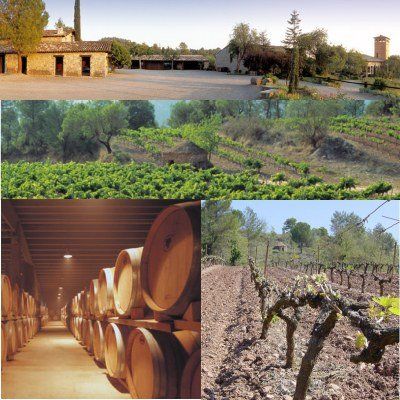