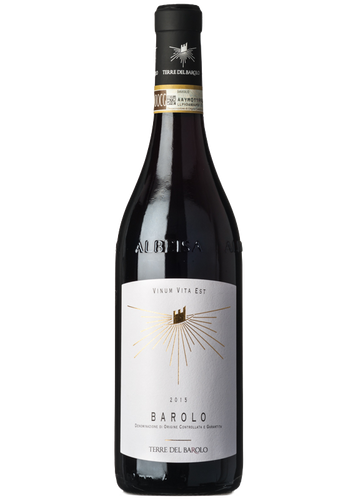 The Barolo from the Terre del Barolo winery is the most representative product of the company. One of the most classic and competitive Barolos of the Langhe, historical and authentic expression of the greatest Nebbiolo there is. “Vinum Vita Est” is the company's historic motto, which appears at the top of the label and carries with it the genuine spirit of its origins: wine is life, and life is wine. In fact, in this line there are only wines from the Langhe, inextricably linked to their territory of origin, a perfect combination of great vineyards and traditional experience.

The Terre del Barolo winery was founded in 1958 as a farmer's house, because these are the three hundred members who make up that family; each member lives the land, cultivates it and nourishes it, each family with its culture, its history and its habits gives an added value, which fills this reality with events. Terre del Barolo today covers all the great municipalities of the appellation, from Monforte to Novello, from Serralunga to Verduno, and makes Barolo wine both by parceling out the crus and in the classic assembly of different vineyards.

The classic Barolo is the son of this traditional conception: to combine all the best company crus in a single bottle, in order to give the consumer a balanced Barolo, which is at the same time appreciable immediately or over the course of long years of evolution. Harvested strictly by hand and with love by the winemakers of the consortium, on the typical clayey-calcareous soils of the mythical UNESCO hills of Barolo, this red, after malolactic fermentation, rests 38 months in the cellar, of which at least 18 in French oak barrels of 25 / 50 hl. Large barrels and long aging are two other essential characteristics of traditional Barolo.

The result is an authentic Barolo also from an organoleptic point of view, with glasses with a wonderful intense garnet color with orange reflections and great consistency. The nose is elegant, with notes of violets, small red fruits and leather. The sip is structured and harmonious, with persistent and soft tannins. Typical with first courses based on mushrooms or cheeses, or served with white truffles from Alba, roasts and stews of red meat and game, but also with aged cheeses.

Terre del Barolo was born in 1958 and represents all the eleven municipalities of the denomination with more than three hundred members. A big family in the name of wine. People who, at times when many fled from the land, managed to keep their strong roots in this extraordinary territory, making it known all over the world. One of the wonders of this region is the Terre del Barolo winery from Castiglione Falletto, born among the vineyards that give rise to one of the most...