We are sorry for any inconvenience this may cause you and hope to see you back on our e-commerce very soon.
10% off ANY OF OUR WINES when you buy 6 bottles!
Home/Spain/Ribeiro/Sameirás Tinto 2018

Antonio Cajide Gulín is the son of Ribeiro vine growers and, after having had various other jobs, he...

Antonio Cajide Gulín is the son of Ribeiro vine growers and, after having had various other jobs, he returned to the family line of business to embark upon a pure and simple version of viticulture, and to repudiate the poor image of the Ribeiro Denomination of Origin, due to the industrial quantities being produced by Galician cooperatives.

Back in the year 1999, Antonio decided to set up his own winery and restore old vines, grafting long-forgotten traditional varieties. He had just 6 hectares of vineyards, planted in soils with plenty of slate, quartz and pebbles at altitudes of between 100 to 300 metres, but with a significant level of humidity. The philosophy adopted has been to allow viticulture a free rein, applying products only when complications set in.

Sameirás Tinto is Antonio Cajide's pride and joy. An amazing blend of indigenous varieties that includes Mencia, Caiño Tinta, Brancellao and Sousón, creating a powerful wine that looks like a Burgundy due to its paler colour. Its 12% alcohol content could be misleading, as the fruit concentration has a huge hit, however normal it may appear; fresh, balsamic aromas are gently spiced with subtle notes of cloves and pepper...all in all, perfectly balanced and elegant. 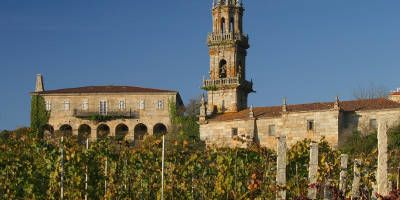 As the son of vine growers, Antonio Cajide returned to the family business with the clear intention of restoring a way of working that could only serve to raise the region's status - a far cry from large-scale production by cooperatives and huge wineries – by retrieving ancient vineyards and reclaiming indigenous varieties.