This is a powerful Priorat that is dangerously easy to drink. I have enjoyed it with pork and chicken as well as with fuller tasting fish. Great with arroz negro etc. Strong but soft flavours and aromas. 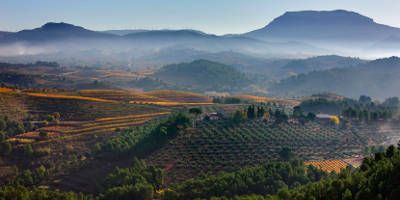 The realisation of a dream, “bottling the land”, and a reality: a company run by Pere Rovira and his daughters, showing their passion, tradition and sincerity. Mas d’en Gil is situated in the southern part of the Priorat, where the Garnacha takes precedence over the Cariñena, more typical of the northern area. The location is known as the Priorat’s “botanical garden”, due to the presence of small clumps of lavender and rosemary bushes growing amongst the vines. Mas d’en Gil...