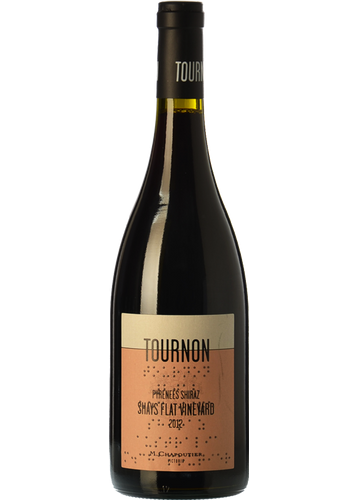 The Syrah grape is also known as Shiraz, especially in Australia, where this wine originated. They are two different names for the same grape, which proves a good introduction to the philosophy of this producer, Michel Chapoutier, a man with drive and creativity, who advocates that a wine should be a reflection of the terroir, that magical mix of soil, climate and people. A Syrah wine from the Rhône, where Chapoutier is particularly well-known, has virtually nothing in common with one from Australia, despite being made from the same grape, and that's not due to being called by a different name there, but because the terroir is different. Chapoutier is an expert producer and very knowledgeable about Syrah, and Shiraz, but the real protagonist of his wines is the terroir. Providing resources and skill, he and his team allow the expression to be as natural and authentic as possible. That's why the Chapoutier house has gradually embraced biodynamic methods in all its vineyards.

The Maison Chapoutier boasts a family tradition that dates back to 1808, although it wasn't until Michel Chapoutier took control of the company in 1990 that its wines began to stand out, presenting a very extensive catalogue whose excellent reputation is acknowledged today throughout the world. Over the years, the tireless spirit of this passionate vine grower and wine lover has led to an expansion of horizons, in both the old continent itself, with the production nowadays of wines in Alsace and the Roussillon, as well as beyond its frontiers. Thus, in 1997 he arrived in Australia where, although he became involved in some early projects in other areas, he managed to find his ideal terroir in the Victoria Pyrenees, a mountainous region in which he established his Domaine Tournon, with two vineyards, Shays Flat Estate and Landsborough Valley Estate.

Shays Flat is also the name of the wine, one of Australia's most outstanding wines, 100% Victoria Pyrenees, different from a Rhône in profile, and of a quality that's undeniable and highly acclaimed. Fermented in concrete vats and stainless steel, and partially matured in French oak barrels for 12 months, the Tournon Shays Flat captivates with its aromas of ripe black fruit (cherry, blackberry) and its rich liqueur notes, spicy (pepper) nuances and tobacco hints. On the palate it's rich and juicy, with some delicate, smooth tannins. Intense and most pleasant, the fruit aromas continue on the palate, accompanied by subtle touches of black liquorice and a delightful acidity which lovers of the Rhône Valley Syrah will surely appreciate.

Another great Chapoutier wine, this time from Australia.

The Maison Chapoutier lays claim to a family tradition which dates back to 1808, although it wasn't until Michel Chapoutier took control of the company in 1990 that its wines began to stand out, with a very extensive catalogue offering a variety of high quality products. Chapoutier is particularly well-known for its remarkable Hermitage wines; in this appellation, the Chapoutier maison owns its largest tract of wine-producing land, comprising 34 of the 115 hectares held...