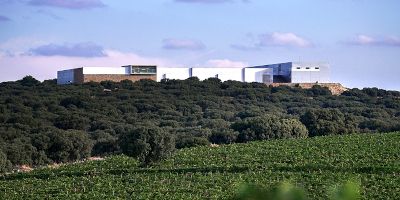 In 2003, the Martínez Bujanda family, owners of the winery group which includes Rioja-based Finca Valpiedra, among others, unveiled their new project in the La Mancha region, a vast estate of 1,000 hectares, located within the provinces of Cuenca and Toledo. 421 of these hectares encompass vineyards planted with mainly Tempranillo, Cabernet Sauvignon, Merlot and Syrah, on a loam soil with a high calcium carbonate content and poor in organic matter, lying at an altitude of 900 metres.

The winery is a spectacular building consisting of three large blocks, avant-garde and ultra-efficient in style. It is equipped with the latest technological innovations, but the work carried out within always shows respect for artisan methods practised with the utmost care, thus obtaining wines which combine the best of the new and of the old, setting themselves apart from those traditionally made in the area.

(Antigua, the winery's name, is due to the old vines which were growing on the estate at the time it was purchased).