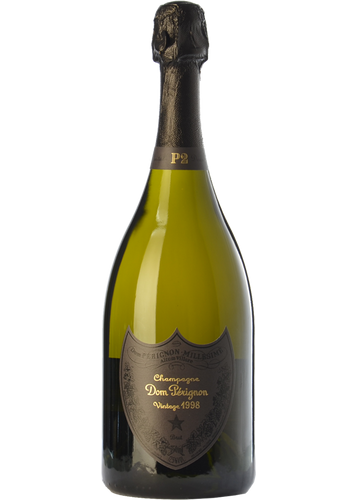 Dom Pérignon P2 is, to put it briefly, a Dom Pérignon disgorged in its second plenitude, a Dom Pérignon which will delight the senses at its most decisive moment of expressivity, intensity and sensibility. Its first plenitude took place after nine years of ageing, and is the Dom Pérignon as we usually know it; the second, this precise and exquisite Champagne, matured for over 12 years on its lees; and there will be a third, after more than twenty years of lees ageing; three gems that demonstrate the excellence of this Champagne and the magnificence of long maturation periods on the lees.

Dom Pérignon P2 or Plenitude 2 is a particularly intense and vibrant Champagne. If the creations of Dom Pérignon are always conceived with the vintage as main focus and based on a scrupulous selection of the best grapes, with Dom Pérignon P2 there is the added element of lees ageing for over 12 years, which bestows on the end result a vigour difficult to obtain in any other way. With P2, Dom Pérignon bids farewell to the Enotèque series and brings out a high definition Dom Pérignon, at its peak.

As a consequence of this long, slow maturation on its lees, the Champagne acquires expressivity and offers an intense bouquet with aromas of honeysuckle, fruit, toasted almond and iodine notes. On the palate, it comes over as especially creamy and enveloping, with persistent aromas leading into a smoky, intense and vigorous finish. An assemblage of great balance that further enhances the distinctive Champagnes of this illustrious winery.

Dom Pérignon is much more than a Champagne. Its sublime effervescence, exquisite and delicate texture, and majestic and toasted character have made it a legend; an icon of luxury and elegance and, perhaps, the most desired Champagne in the world.  The first vintage was created by Moët & Chandon in 1921 and released for sale 15 years later, in 1936. Nowadays Dom Pérignon belongs to the LVMH business group. Its name refers to the seventeenth-century...