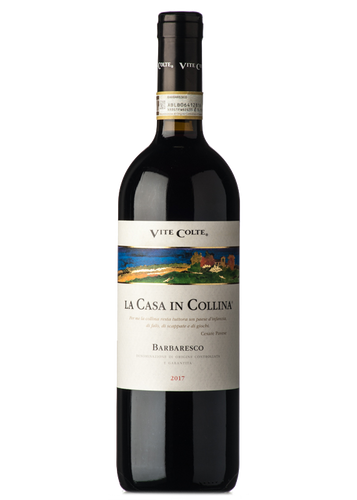 Before being a wonderful Nebbiolo, La casa in collina is the title of a novel by Cesare Pavese (1908-1950), one of the best-known and most pointed Italian writers of the Piedmontese Resistance. As in all Pavese's novels, the Resistance is recounted against a backdrop of harrowing personal events: in an existential crisis, the protagonist Corrado, a Turin professor originally from Belbo like the author, watches almost apathetically as the dramatic civil war unfolds after the Armistice, torn by the unresolved doubt that young Dino, the son of his old girlfriend Cate in whom he sees himself again, is in fact also his son.

Intense red tending to garnet, La Casa in Collina expresses an intense and complex bouquet with notes of ripe fruit, especially blackberries and blueberries. There are also notes of tobacco and coffee. On the palate it reveals itself as a rich and slightly sour Nebbiolo, but the tannins, thanks to more than a year's rest in large casks, are sweet and well-integrated. The finish is long, with an aftertaste of strawberry and vanilla.

Vite Colte is a cooperative made up of 180 members who strongly believe in a concept of shared quality, where the responsibility of individuals is an integral part of the final result. Winemakers, companions, friends. The members of Vite Colte are "accomplices" in a project that demands a dedication to quality equal to the rigour of the protocol with which it is pursued. Each winegrower, therefore, receives payment based on the area planted with vines and...

iPurchase limited to 60 btl
View all