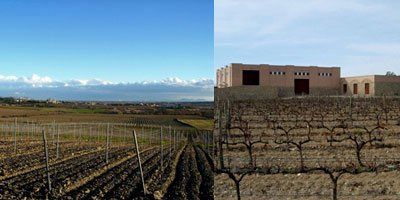 Mas Llunes is a family-run winery, built in the year 2000 on the estate after which it was named, which makes wine using the grapes of vines growing on the property.

The estate lies in the Empordà area, in the north-east of Catalunya, 10 km from the French border and 10 from the Mediterranean coast. It is situated in the foothills of the Sierra Albera and comes under the influence of the Tramontana, a strong northerly wind typical of the region which favours vine cultivation, since it prevents micro-organisms developing that are harmful to the grapes. The soil covering the higher slopes is composed of slate, and the closer you get to the alluvial plain it becomes clay-loam in texture, with considerable variation from one plot to another. This soil diversity enables wines with very differing textures and aromas to be obtained. The land here generally has acid soils that are poor in organic material and offer good drainage.

They own 45 ha of vineyards planted with the traditional red varieties: Garnacha Negra and Samsó, supplemented with Merlot, Cabernet Sauvignon, Syrah and Cabernet Franc; and the white varieties Garnacha Blanca and Cariñena Blanca. 6 of the hectares comprise very old vineyards, with vines aged from 50 to over 100 years old. The rest were planted between 1992 and 2005.